Another concert season has sped by, and we held our final NCB concert of the summer season on August 9.

Sara Perfetti was once again at the helm, and chose one number from each concert this season, along with a few extras at the end.  Despite the threatening weather, the Negaunee City Band was once again able to get a full concert in, and the crowd was another large one. 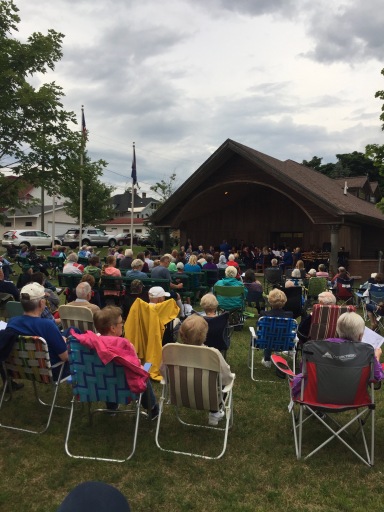 On behalf of the Negaunee City Band thank you to the people who helped to make the 2017 season a success.

To Sara Perfetti, who directed us and spent countless hours choosing music and coordinating practices, parades, and performances.

To Gerry Anderson, whose behind the scenes contributions to the band are impossible to list here, but which make it possible for the Negaunee City Band to continue the traditions that have made it a staple in the community and the U.P.

To Norm and Marilyn Andrew, Bruce and Kathy Houghton, Dave and Lori Perry, the City of Negaunee, and the countless others who spend a huge portion of their summer (and winters) making sure that we have people to play, new music, uniforms, and a building in which to practice and perform.

To the performers, those who came every week, and those who filled in when they were able, without you we would literally not have a band.

And lastly, to the audience, who turns out week after week in the summer, whose honks and cheers and clapping make all of the winter practices worth it, and without whom the Negaunee City Band would be just a bunch of people playing in a room.  Thank you.